Since I began college in 2006, I have made an income online, and have aspired to be a full-time entrepreneur. Today, the iPhone is helping me to make that dream a reality.

As a freshman middle-class teenager beginning my career at Santa Fe College — and later, at the University of Florida — I had the luxury of full tuition coverage by a state scholarship, and parents who were willing and able to help me pay my rent and cover many of my expenses. But they warned me this would not last long. I would soon have to get a … job.

As someone who had only held an office job in high school, the thought of applying for jobs in Gainesville was intimidating. Especially since I was new to this town among thousands of college students far more experienced than I in most types of work.

Nevertheless, I applied to a few places but was never hired.

I did once get an interview at a health food store, but as I was driving to the store for the interview, all dressed and rehearsed for the interrogation, I received a phone call from the store manager telling me they had just hired someone who had experience in the health food industry.

I was pissed at the time, that she didn’t even give me the chance to interview, but I see now that she did me a service.

So I went home, pitied myself for a little while, but then scrambled to try to figure out how to start making some money without having to get a traditional job.

My father is a businessman, and he had inoculated me throughout childhood with tales of making childhood money mowing lawns, distributing newspapers and through other odd jobs. I was raised to believe that I too could produce something of value to offer to people.

In the midst of the blogging boom that was occurring at the beginning of my college years, there were thousands of companies and solo entrepreneurs looking, and paying, for unique content to add to their sites. I also happen to be an English major who enjoys the craft of writing.

I realized I could make a decent chunk of cash by getting really efficient at writing articles and selling them for relatively low prices. I began making one to two hundred dollars a week selling content articles via Constant Content, Associated Content and by pitching myself directly to people. I once created a blogging job for myself, where I convinced an online natural beauty product store to pay me $10 per post to write 300 words each day on the benefits of natural beauty products.

What else could I do to earn money? I made around $25 per month filling out surveys for one of the few reputable survey companies; I bought domain names that I considered valuable, and sold them to people in forums; and I taught myself how to build WordPress themes and sell the unique rights to people.

At the time, the recession was not something on many people’s minds, so there were more people willing to spend money on these services, and fewer people competing for the jobs. Incidentally, my timing was just right.

In December of 2006, when the iPhone was merely a rumor, the opportunity to build this website, AppleiPhoneReview.com, fell into my lap. I purchased the domain name with the intention to sell it, but abandoned that hope when all prospective buyers insisted there would be no iPhone given that Cisco Systems, Inc. owned the trademark to the word. Oh well. I started writing about the iPhone anyway, just in case.

Then, a month later, the Apple iPhone was introduced, and I was one of the first people to begin writing about it. Because no one believed the iPhone product would actually come to fruition, I had a competitive advantage in already owning this domain name, and I took the opportunity in the next few years to build the site up to its eventual readership of several thousand people per day. 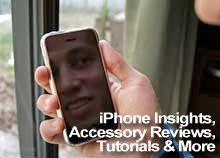 This iPhone website is in fact the reason I became financially independent from my parents by the time I was in my junior year.

Today, I have neglected my beloved iPhone site as I have become occupied by a new business I started in Gainesville, and my income from this site has also suffered.

But I have made a decision to try to revive this website, only with a new purpose: namely, a stronger focus on productivity, and on how to use your iPhone as a means to a more meaningful life.

I will still post iPhone tutorials, reviews of accessories that I recommend, and other helpful articles. But my overall focus will be on teaching people how to use your iPhone as a tool that enables you to build a more productive and meaningful life, rather than as a toy that distracts you from achieving the life of your dreams.

I am on a personal journey to build an income in a meaningful way, and I am using my iPhone as a means to that end.

This blog will document the story of my life as an iPhone-owning entrepreneur, and given the time, I would like to build a stronger community here and encourage more people to help each other out, as often happens on here already. It is always inspiring to see in this blog’s comments people all over the world helping each other to solve problems.

My aim is to continue to offer valuable information, in the form of a blog (which will always remain free), alongside more in-depth, paid offerings that could help me make some income, help people with a real productivity problem, and hopefully allow me to reduce the number of Google Ads on the site. Everybody would win.

Productivity is a problem that I am trying each day to solve in pursuit of a meaningful life for myself.

I believe that it is the work that you do that determines the quality of your life. And as a member of the generation of “lost 20 somethings,” I have decided not only to reject the traditional job market and pursue my own full-time income online, but to do so in a meaningful and fulfilling way.

Make no mistake, productivity is a large part of the equation that sums up a meaningful life. No matter who you are, a part of your day must be dedicated to doing work that gets you paid. Especially if you have taken it upon yourself to start your own business, then this “getting paid” stuff requires your utmost in creativity and productivity.

The iPhone is an incredibly sophisticated tool that can help every one of us to do meaningful work and live up to our self-appointed personal purpose. But it can also be a brain drain and a huge distraction, so we must learn to use it properly.

In the past year while running a new business, the iPhone has become a vital technology for achieving my business and life goals. I am now the master of my iPhone; it is not the master of me. Over the next few months, I will share what I am learning on how to use the iPhone as a tool rather than a toy and as a means to a rich, meaningful and productive life.

I look forward to connecting with you on a more meaningful journey.

To stay connected, sign up to receive occasional free emails on my progress:

Please opt-in to receive my free iPhone Productivity Reports newsletter by email. I look forward to sharing the story of my entrepreneurial journey with you in hopes that you too can learn to use the iPhone to achieve your life goals:

Chris, I love the inspiration for the new them you’ve got going over here. My girlfriend just bought me an iPhone (I hate my blackberry) so I’m hopping on the bandwagon. I’m honestly pretty nervous about being one of those people that’s on their phone all the time — but thankfully like you said I know it’s about training oneself to use it the right way. One of my biggest pet peeves is people using the phone at the dinner table. I’m usually the only person who doesn’t take out their phone from the start to finish…and that’s one of… Read more »